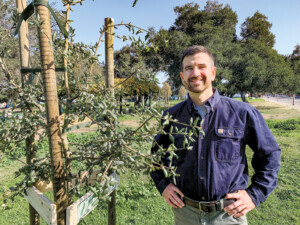 For his exceptional contributions to urban forestry, ESF graduate David Moore ’06 FNRM has received the Arbor Day Foundation’s Trailblazer Award. The foundation is the largest nonprofit membership organization dedicated to planting trees, and every year it honors six individuals and organizations for their work in tree conservation. The Trailblazer Award recognizes professionals under the age of 35 who have already made the world a better place.

Moore earned a bachelor’s degree in forest resources management at ESF and a master’s in public policy at Georgetown University. This dual focus enabled him to become a spokesman for science while effecting major change first in New York City, where he developed a groundbreaking  system for tree selection, and now in Oakland, California, where he is senior tree supervisor.

Writer Judy Gelman Myers recently spoke with Moore about the environmental, fiscal and policy challenges he faces as he transforms concrete deserts into tree-lined oases.

ESF: Let’s begin with a simple question. What is urban forestry?

DM: Urban forestry is managing trees for human benefit anywhere people have changed the landscape enough that growing conditions for trees are no longer natural.

A hundred years ago, people valued urban trees mostly for their aesthetics. Today, we appreciate their environmental benefits, too. David Nowak ’85, at the USDA Forest Service’s Forest Inventory and Analysis unit at ESF, pioneered a great technology called i-Tree. It lets us measure the environmental benefits of urban forests in dollars and cents. Instead of building more pumps to move water through sewers, or instead of installing more air conditioners to cool off buildings, we’re learning that trees can provide equivalent services at a much more competitive cost. In this sense, urban trees are valued and utilized as green infrastructure that appreciates in value over its lifespan.

ESF: One of your aims is to bring people and science together. What exactly does that mean?

DM: At ESF, I encountered a world of fascinating scientific research. However, it takes a certain type of person to tune in to that information; scientific journals are typically read mostly by science practitioners. I wanted to be a mouthpiece for all this research, to help reach the everyday person.

That’s how I got interested in public policy, which is using research and statistics to form policies that help society. Because most tree experts work in the woods and other remote areas, understanding trees in a city was an incredibly valuable skill. I could make a huge impact by just sharing some of the basic research findings. Bridging that gap is very meaningful, and it’s where I find myself on a daily basis.

ESF: How did your studies at ESF prepare you for your job?

DM: As a forest resources management major at ESF, I was immersed in a fascinating world of science, studying the forest from deep in the soil all the way up to the sky, from every scientific and mathematical aspect imaginable. ESF has over 25,000 acres of forest to explore and many labs every week — there’s no substitute for all that exposure. Though I might not be calculating derivatives or solving chemical equations on a regular basis in my career, all that problem-solving work and science curriculum gave me an indispensable foundation for approaching the various tasks that arise in my work.

DM: Broadly speaking, I set it with my team, typically through small, incremental changes. The most effective policies are developed through research, data analysis, consideration of trade-offs, balancing priorities, consensus-building with stakeholders, and an approval process through a chain of command. Policies are constrained by availability of resources, time, other laws/policies, etc. Some examples of the policies under my purview are tree protection, prioritizing tree removal, and planning the urban forest and its canopy so when old trees reach the end of their lifespan, you have plenty of new ones coming in. A common goal across different cities is environmental equity/environmental justice; in the context of urban forestry, you want to disperse trees in areas that need them the most — areas that are statistically most prone to pollution, or are closest to the highway, or have the most amount of concrete. 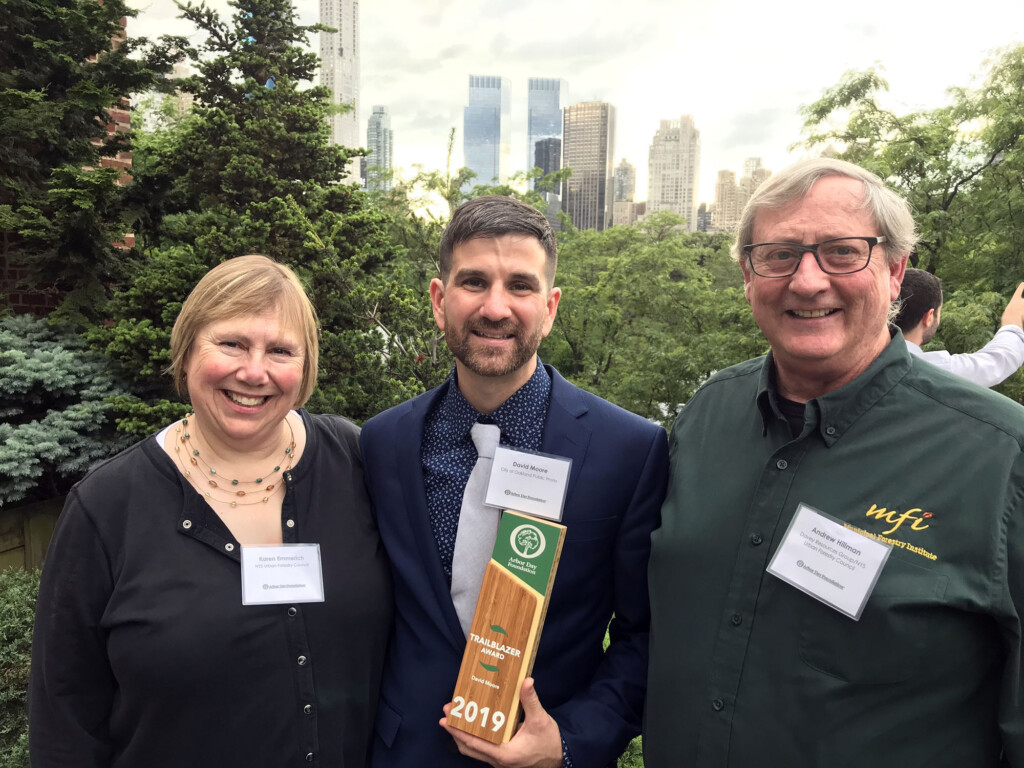 ESF: As senior forester for the New York City Department of Parks & Recreation, you instituted a ground breaking tree selection process. Can you describe it?

DM: Arborists focus on one tree at a time. Ask one what you should plant in front of your apartment, and they’ll say, “There are wires overhead, and this much space to the building, and this much sunlight per day. This many people walk down the street, so we can make the tree bed this big. Based off these limitations, you should plant this type of tree, which will thrive in these conditions without causing infrastructure problems.”

That’s how you choose one tree. But what happens when you’re in charge of an urban forest with tens or hundreds of thousands of trees? It can be overwhelming when you’re determining which trees to select, because you’re trying to make very specific decisions, as an arborist does, but on a scale of a thousand trees per year. Your decisions need to make sense on both a tree-to-tree basis and on a macro/forest basis. You also have to consider species diversity — when you have too much of one species, a pest like the emerald ash borer could wipe them all out.

When I worked for NYC Parks, I was tasked with developing a system that could help streamline tree species decision-making for our team of urban foresters. We decided to devise categories that would help us narrow down our choices. But how do you determine which categories help you narrow things down, especially in such a big and diverse city as New York? We came up with three — overhead limitations, such as power lines; soil volume limitations, determined by the size of the tree bed; and overall site condition, ranging from very industrial, to residential, to parks. There weren’t so many categories that it was impractical as a tool, and not so few categories as to be too broad. The different combinations led to 18 general planting site types called biotopes — aka subsections of our urban forest biome. Urban foresters would survey planting sites in the field and label each one as a specific biotope, then find tree species appropriate for each biotope using a giant spreadsheet I made of over 250 tree species, their site tolerances, and their ideal biotopes for growing in. This system could also be fine-tuned as needed, depending on other conditions specific to each planting site that went beyond those three basic categories.

Developing the process wasn’t reinventing the wheel. I simply learned how to package the information in a way that people could use it on a large scale at a fast pace, using objective criteria to narrow down decisions so they were more achievable under the time constraints.

ESF: How much does budget enter into the picture when you set policy?

DM: Unfortunately, the concept of trees being an investment with measurable environmental benefits is still relatively new. Most people see trees as a luxury—something to be planted and cared for when times are good. When times are bad, they don’t rank as high as other city services.

I feel strongly that urban trees should be viewed as a component of city infrastructure, like roads, bridges, or schools — features that provide a service that can be measured in dollars. If you’re going to build a bridge, you have to show exactly how many cars are going to use it, how much it will cost, and what the net benefit is. When we’re planting trees, we’re really planting air filters, building coolers and stormwater absorbers. We need to change the paradigm to see them as infrastructure rather than decoration on the streets.

ESF: You worked in New York for 10 years before moving to Oakland. How does urban forestry differ in these two cities?

DM: In New York City, the pace and the expectations are high. Due to a legacy of research-based public policy and an appreciation for trees as green infrastructure, municipal investment in the urban forest is also high. Oakland is a much smaller city. It has 420,000 or so residents instead of eight and a half million, like New York. And it’s challenged with other issues. My department in Oakland was downsized in 2008 or 2009 due to budget cuts. More than half of the staff were let go and never restored, which means that service levels have been severely affected. So instead of being the best-resourced, fastest-paced, high-volume operation that I’m used to, my biggest challenge now is being understaffed and under-resourced.

ESF: How do you navigate the intersection between environmentalism and public policy?

DM: Tree science is based on predictable laws of the universe. I can always count on the tree growing toward the sun. Working for city government is filled with unexpected situations. Understanding how government operates, what it’s capable of doing and what its limitations are helps me act strategically when I’m trying to do something as big as planning an urban forest.

I think bureaucracy gets a bad rap in general. It’s easy to say our government doesn’t know what it’s doing, but there’s more to it than that. That’s the very reason I wanted to work for local government. I wanted to step up to the plate and be the change I wanted to see rather than just complaining about how other people ought to do a better job. I have a huge appreciation for anything actually accomplished in society, the consensus that needs to be made, the high roads that need to be taken in the face of certain people never being happy or satisfied.

To give an example of what I’m saying, the government is a monopoly service provider. If someone is not happy with my service, they can’t go to my competitor instead. A government agency provides what it can, serving the most people with the limited resources available. That’s where you get into the art of government — how can we equitably serve the most people despite the inherent constraints?

For anyone out there who’s considering a life of government work, we need you! We live in a world where people think that sounding off on social media is the answer to the world’s problems. It’s not. We need more people to start a career in government, where they’re in the driver’s seat and can facilitate a world in a way they’re skilled and passionate about. Even the most challenging days working for a good cause are rewarding, and seeing the tangible impacts of your hard work is a reward in and of itself.

Judy Gelman Myers is a freelance science writer based in New York City.