By Claire B. Dunn

D r. Allison Oakes’ office and lab in Marshall Hall are filled with tiny American elm trees, busily growing on the nutrients that Oakes ’15 painstakingly records in the hopes of finding the exact combination that best suits the little plants.

Her work is part puzzle: “It’s fun to try to tease out all the pieces. It’s problem solving!” And part passion: “I love gigantic trees in cities. They are fantastic. There are so many benefits to urban trees — they help regulate the temperature, they improve the air quality, they provide habitat for wildlife. Plus, people need to see green. It’s just good for them.”

Oakes is the College’s Orentreich Research Fellow, a new position supported by a gift from Dr. David Orentreich. Oakes is immersed in finding the most efficient ways to grow and develop transgenic American elms so researchers can get to work finding the gene(s) that could enable the tree to withstand attack by organisms that have killed an estimated 80 percent of the species.

The American elm tree was a common sight in American cityscapes. By the 1970s, however, more than 75 million of them had died from Dutch elm disease, caused by a fungus called Ophiostoma novo-ulmi. The disease causes vascular wilt. The fungus blocks the vascular system, causing the branches to wilt and die from lack of water. But simply arming the trees against one fungus is not enough. American elms are also threatened by a disease called elm yellows, caused by a phytoplasma. These pathogens are bacteria-like organisms that have no cell wall and are too small to be seen with a compound microscope.

Oakes’ work is based on techniques  used and discoveries made during ESF’s 30 years of research into developing a blight-resistant American chestnut tree. That project, currently undergoing the federal regulatory approval process, is led by Dr. William Powell, who is also overseeing Oakes’ research. American elms were the subject of research at ESF until about 2010, when it was set aside as Powell and his now-retired research partner, Dr. Charles Maynard, pursued the chestnut project. 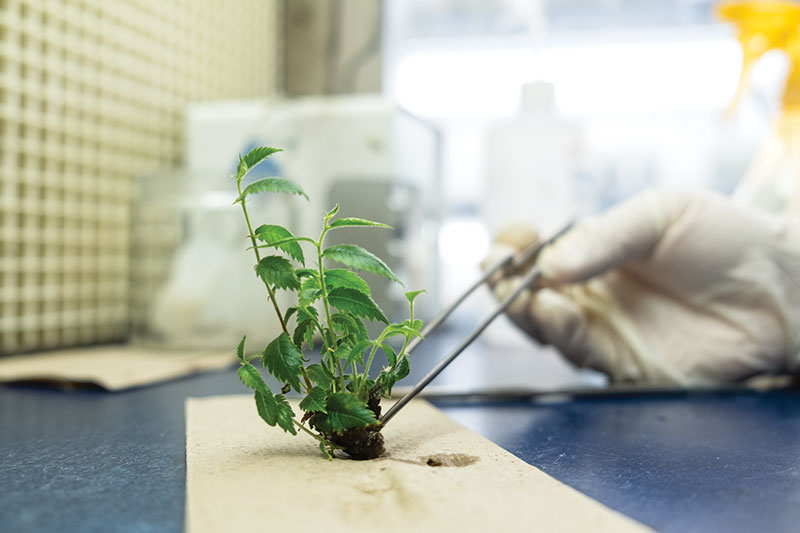 A growing American elm in a laboratory in Marshall Hall.

The elm work is still in its early stages.

“We are putting a system in place that will allow the American elm to resist pathogens,” Oakes said. “At the moment, I’m a methods analyzer, looking at each step of the process to see if we can improve the efficiency. It will help us determine the best way to use resources, including time and materials. It’s not very flashy work, but someone needs to sit down and find out what works and what doesn’t.”

Oakes tracks the nutrients that help transgenic elms grow the fastest and survive at the highest rate. She tracks macro- and micronutrients, vitamins, plant growth regulators and carbohydrates. She also has transformation experiments underway, using green fluorescent protein as a test gene so she can easily see whether the transformation was successful.

She’s confident that once ESF has an efficient method to produce healthy transgenic trees, funding sources will be available to support the next step: determining which gene(s) can provide the tree with disease resistance. Much like the chestnut project, which uses one gene from wheat to enable the tree  to tolerate the once-fatal blight, Oakes will be looking for the least invasive way to arm the elm against the pathogens that cause Dutch elm disease and the less commonly known elm yellows.

“You can’t just make them resistant to Dutch elm disease,” she said. “If you do, and you plant them, they are going to be immediately murdered by elm yellows.”

Among the helpful items in Oakes’ intellectual toolkit are the knowledge she gained in her early college years as a classical civilization major and the skills she picked up in a long-ago job as a barback.

“The Latin and Greek I picked up studying classical civilization came in handy when I transferred to ESF,” she said.

The barback work came in handy when, as an undergraduate biotechnology major at ESF, she picked up a job washing glassware in Maynard’s lab. “I knew how to get the soap off the glassware so the plants didn’t die instantly,” she said.