Out on the Island

For Jerry Belant, The World is A Research Lab

For Jerry Belant, The World is A Research Lab

On a cold snowy day last spring, Jerry Belant leaned over a big gray crate with his hand on the latch, his bright yellow flight suit contrasting sharply against the white snow and the stationary helicopter behind him.

“OK, everybody ready?” he said calmly, looking up at his collaborators. “OK, three, two, one.” He opened the door and stepped back.

A wolf burst forth, bounding across the snow. The animal, with its shaggy grayish white coat, struggled a bit to find its footing. A long journey had brought it to this point — first captured in Canada’s Michipicoten Island Provincial Park, then transported by helicopter, weighed and analyzed by a team of researchers (including Belant, who had peered into its mouth to inspect its pearly teeth), and finally relocated to Michigan’s Isle Royale National Park.

The animal stumbled a bit in the crunchy snow before disappearing into the shadows of the woods. A video made by The National Parks of Lake Superior Foundation documented this scene.

Belant is the inaugural Camp Fire Conservation Fund Professor of Wildlife Conservation at ESF and relocated himself to upstate New York in August 2018 to start the new job. Here he leads an interdisciplinary team of field staff, research associates, graduate students and postdoctoral scholars in studies encompassing diverse animals and ecosystems, from northern Michigan wolves to Serengeti lions, from Missouri black bears to wild boar in Argentina.

“I’m interested both in ecological questions and conservation or management applications,” he said matter-of-factly. “I also have the good fortune of working with the species I enjoy, so it’s really the best of both worlds.”

The Canadian wolf he set free on that day was one of seven recently relocated to the remote national park surrounded by Lake Superior’s waters. The move is part of a long-term effort to restore the island’s ecosystem. 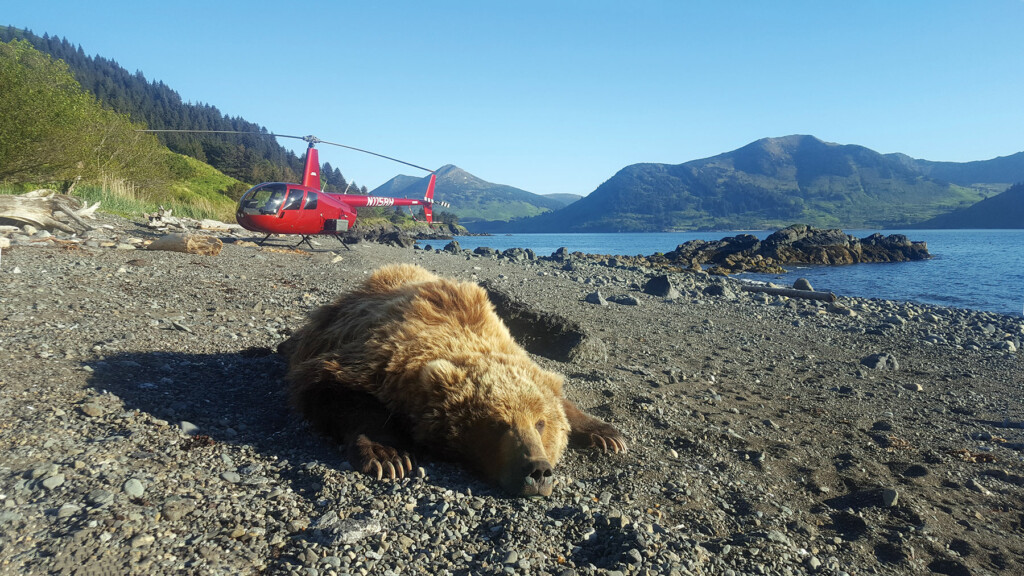 This immobilized brown bear was involved in research on Raspberry Island, Alaska.

Belant will study the ecosystem effects of the reintroduction. Will the wolves keep the moose population in check? Without as many moose browsing for food, will balsam fir and aquatic vegetation rebound? What will happen to scavengers such as ravens? And how will nutrient cycling change? The work is just beginning.

The northern Midwest landscape is intimately familiar to Belant, and his barely-there Midwest accent still comes through on occasion. He grew up in northern Wisconsin, tramping through the forests of sugar maples, hemlock and white pine year-round, spotting animals such as deer, black bears, coyotes and foxes. He
and his dad enjoyed hunting, fishing and trapping together.

“I fell in love with nature,” he said. And that love prompted him to pursue studies in natural resources and wildlife ecology as an undergraduate and master’s student at the University of Wisconsin-Stevens Point during the 1980s.

After working in various research positions at the National Park Service, the U.S. Department of Agriculture and the Fond du Lac Natural Resources Department in Wisconsin, Belant attended graduate school at University of Alaska Fairbanks and earned his Ph.D. in 2006. While there, he investigated the diet, reproduction and habitat use of overlapping populations of black and brown bears in south central Alaska.

He then spent 10 years on the faculty at Mississippi State University, where he was named the Dale H. Arner Distinguished Professor of Wildlife Ecology and Management. There he built a significant research program: habitat restoration for black bears, bird deterrent methods at airports, deer fawn survival, vulture roost dynamics, elk distribution and resource use, marten and fisher behavior and much, much more. Although he declines to boast about his accomplishments, his stellar record is clear: He has co-written three books and produced nearly 300 peer-reviewed publications that have been cited more than 4,500 times. He has also secured more than $14.5 million in grant funding since 2008.

In 2018, ESF hired him to become the inaugural Camp Fire Conservation Fund Professor of Wildlife Conservation.

Moving to ESF in August 2018 was a “no-brainer,” Belant said. He already admired ESF, with its great reputation and widely known and respected faculty members. He was happy to join the “cadre of outstanding scientists” here. Plus, the move was a great fit for his family. He and his wife, Mary-Kay Belant, enjoy the snow and the changing four seasons. The airport offered good travel options for visiting their grown kids. Someone considering a big life decision like this might make a list of pros and cons, Belant explained. But in this case, the cons list was blank. It was a win-win, personally and professionally — and he has now set the stage to continue his work here and around the world. 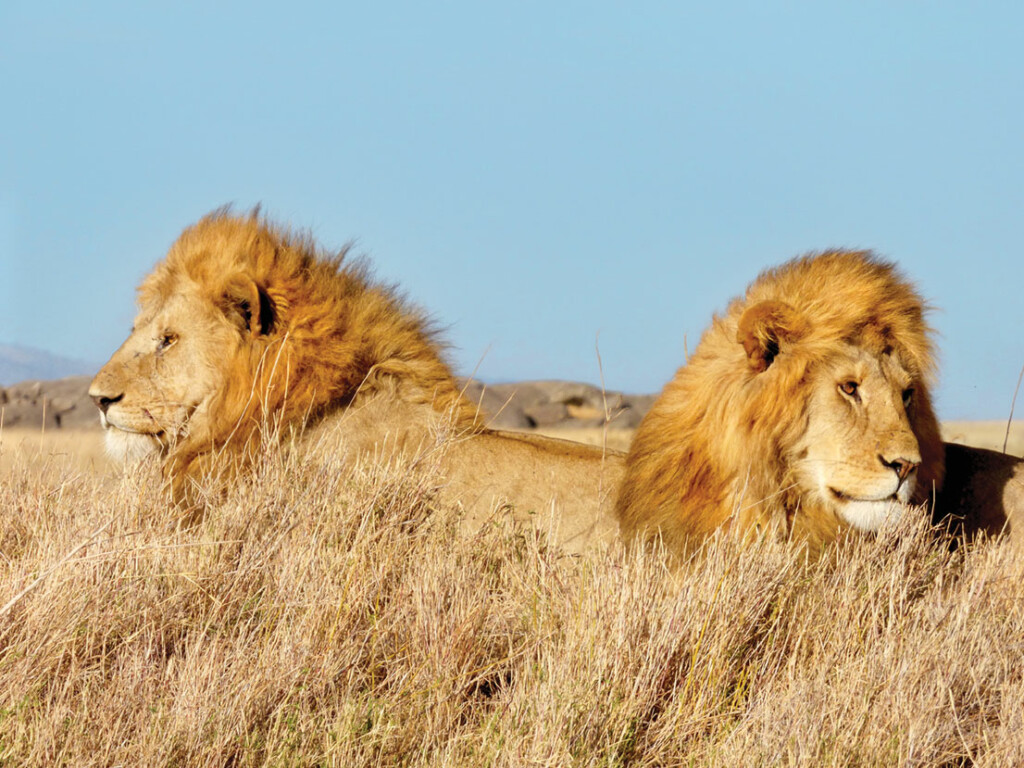 Just a few months before Belant wrangled wolves in the snow this past spring, he was seeking lions in the Serengeti, a few miles south of the equator. For the past four years, he and his collaborators have been working to reduce conflicts between lions and people — and better understand lion population ecology. Because of land use changes, lions are found in less than 10 percent of their historical range. And yet in the past, Belant said, accurately counting the populations has relied on less than optimal methods. His work aims to solve this problem and provide the conservation community and local governments with accurate and precise numbers.

Every trip to the Serengeti is different, he said. Once, he and his team got in their Land Rovers and drove several thousand kilometers, spotting just four lions and snapping two pictures. More recently, during the season of the “little rains,” he and his team drove across the endless plains and through the acacia tree woodlands. A spotter found a lion, then a vet darted it. The team moved in with its gear — stethoscope, pulse oximeter, needles, an umbrella, water — to take measurements, collect blood and hair samples, and fit the collar. Then they set up a huge tripod and lifted the animal in a sling, with a block and tackle, to weigh it.

“When you go through the effort and expense and have the animal in that vulnerable state, we want to maximize potential research value while minimizing potential harm,” he said.

In total for this project, Belant’s team has captured and collared 20. The goal is three-fold: collect data to refine population estimates, help local governments establish appropriate hunting quotas, and identify potential human-lion conflict in real time — and intervene before a problem becomes catastrophic. So far, Belant has found that the lion population is larger than previously thought, at least in the area where they are working.

“That doesn’t mean lion conservation isn’t important or that there isn’t a decline compared with past levels,” he explained. “But in some areas where lions occur, it may not be as dire as currently thought. So with the work we and others are doing, we can now get accurate data, scientifically credible data, and better prioritize our efforts to benefit lion conservation.”

Alison Fromme is a science writer based in Ithaca, New York.